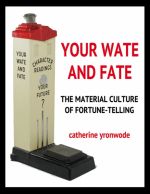 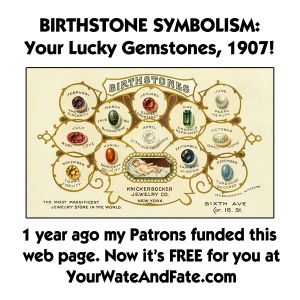 Birthstones for divination and luck

One of the earliest postcards that related months to lucky gemstones and their symbolism as omens was the 1907 embossed and gilded "Birthday Souvenir" by The Colortype Company of Chicago, Illinois. Ostensibly designed as a single birthday card suitable for anyone, it opened the door to the creation of many twelve-card sets of birthstone greetings that delved into zodiacal gemstone magic, character analyses, and the language of flowers. 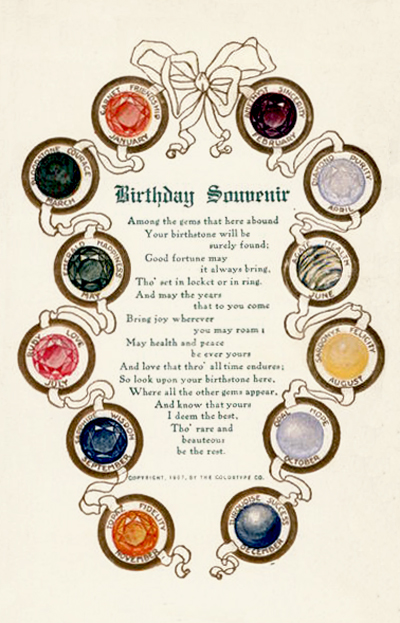 The poem on this card follows the familiar sing-song pattern i call "the English Enchantment," This scansion, with a variety of wording, is found on many fortune telling tea cups, as seen at our sister-site, The Mystic Tea Room in the page about Poetry on Cups and Saucers. Dating back at least to the Renaissance and the writing of William Shakespeare, such verses are found to this day in the metrical magical spells of the Anglo-Saxon people.


Among the gems that here abound
Your birthstone will be surely found
Good fortune may it always bring,
Tho' set in locket or in ring.
And may the years that to you come
Bring joy wherever you may roam;
May health and peace be ever yours
And love that thro' all time endures;
So look upon your birthstone here,
Where all the other gems appear,''
And know that yours I deem the best,
Tho' rare and beauteous be the rest.

Around the same time that the above card was published, the Knickerbocker Jewelry Company of New York City also released a postcard that advertised their birthstones of the months. 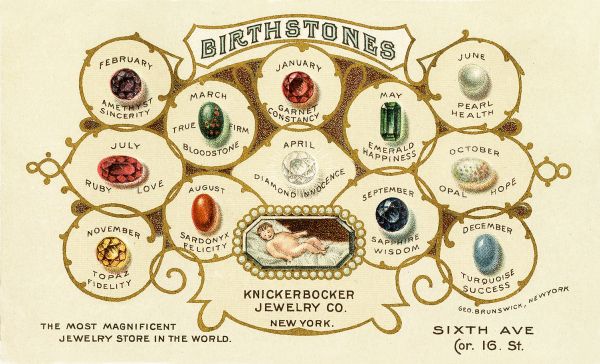 The Symbolism of the Birthstones

On the Colortype card, all twelve stones are arrayed on a single ribboned necklace, with words around each stone. On the Knickerbocker card, the stones are each displayed in a gilded frame, with words accompanying them. The stones were the same on both postcards and their attributions were similar or identical.

The Tiffany Birthstone Poem of 1870

For further thoughts about the origins of the monthly attributions of these birthstones and their magical symbolism, see

Before taking the 19th century Tiffany list of months and meanings for each gemstone as definitive or authoritative, it must be compared with other sets of correspondences. These postcard sets reflect similar, but also somewhat differing beliefs about the birthstones which developed during the course of the early to mid 20th century:

I have more than dozen different sets of birthstone postcards which include character analysis and zodiac attributions. They were released by a variety of publishers, and date from 1907 through 1925. I will periodically add sets to the list above until they are all online and this little notice disappears.